Previously, in Part I: The idea here was to mount a F1 wheel (SRW-S1 from SteelSeries) on the G27 with a quick release system, to be able to easily switch between the stock rim and the new one. All that trying to keep the cost low enough. 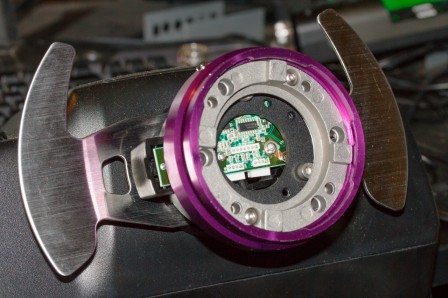 I removed the inside part of the QR in order to pull some cables for buttons or other stuff later. 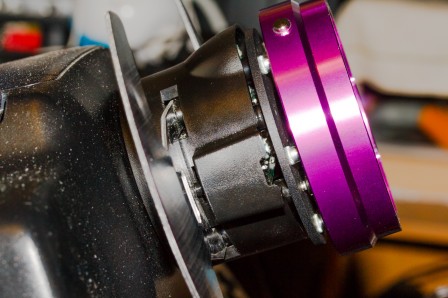 The QR will sit on bolts head for better holding, but I'll need to add some spacers if i want to do that correctly (right now, there is a little play between the plate and the QR).

I can now mount any standard wheel to the G27 base, except, the g27 one is not one of them. So, If I want to mount it, I'll need another adapter plate.
Two solutions here: either buy another plate like the one I use for the wheel base, or made my own.
I choose the second option to keep the cost low, and since I already had a spare plywood plate laying around.

I used the QR plate as template, and make a copy of it. 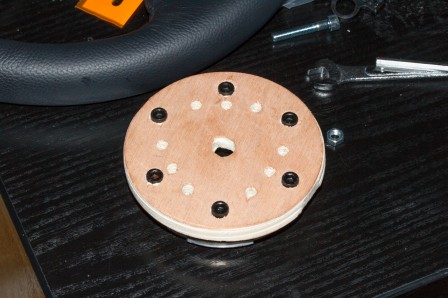 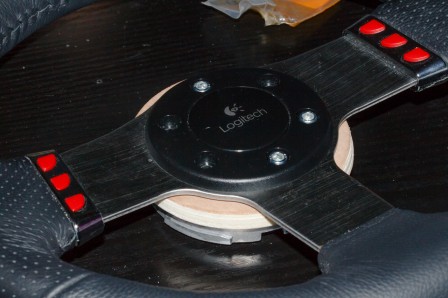 Buttons cables will go through the center hole, and be connected to the original PCB. 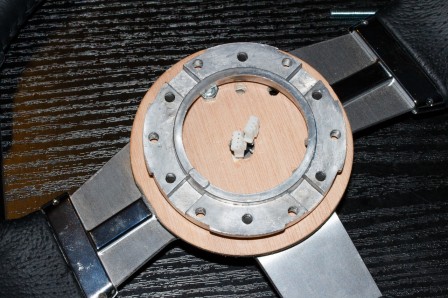 Except, connecting them by hand every time will be a pain in the ass, and kind of defeat the purpose of the quick release :p
I'll have to find a better way to handle the connection between the wheel (any wheel actually) and the G27 base (We'll see that on a next part).

Forget about buttons for now, let's try this first! 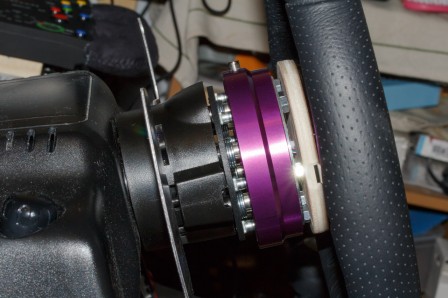 I used spacers on the base plate this time, and there is no noticeable play anymore. Solid and sturdy.

Only one thing: The shifter paddles are a little bit far away from the wheel now, and even with my big hands, it's not easy to reach them. But I'll take care of that later.

Now that the G27 rim part is almost complete, it's time to work on the F1 wheel, cause, you know, that was the primary goal after all ;)

I have come close on a couple of occasions to pulling the trigger on the Simulaje QR, but all in, it is just a bit too expensive.
I found your page here whilst searching for alternative solutions.
I like what you have done and looking forward to seeing the final product.